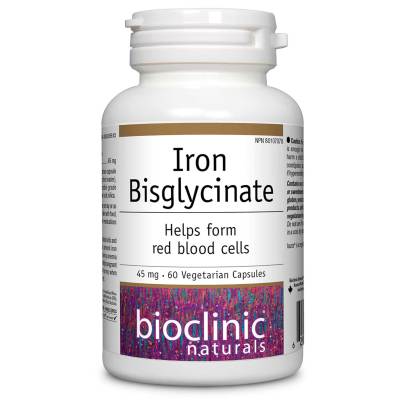 SKU: BCN-9505
Iron deficiency remains the most prevalent nutrient deficiency, as well as the most common cause of anemia worldwide.
Depleted iron stores impair mitochondrial function and cellular respiration even in the absence of anemia, particularly in
metabolically active cells, contributing to symptoms ranging from fatigue and exercise intolerance to cognitive
and cardiac impairment. The mainstay for replenishing iron levels in the majority of cases is oral iron supplementation,
which is preferable to parenteral administration (injections) in the absence of severe symptoms or contraindications.
However, many oral iron formulations have limited tolerability, primarily due to frequent gastrointestinal symptoms.
In contrast, iron bisglycinate chelate, which is composed of two glycine molecules chelated to ferrous iron (Fe2+),
has demonstrated significantly greater bioavailability than standard forms of iron such as ferrous sulphate, ferrous
fumarate, and polymaltose iron. This form has much greater tolerability, allowing for effective restoration of iron levels
using lower doses. For example, at ¼ to ½ the dose of ferrous sulphate, iron bisglycinate chelate has shown similar
effects on hemoglobin, ferritin, and other markers of hematological status in controlled trials, with better tolerability.
It has also been found to be effective and well tolerated in a variety of patient populations, including pregnant women
and children with celiac disease. At 45 mg of elemental iron per capsule, higher than most formulations, it is consistent
with current recommendations for restoring depleted iron levels in pregnant women, though lower than the threshold
typically associated with adverse effects
1 capsule per day or as directed by a health care practitioner. Take with food, a few hours before or after taking other medications or natural health products.